“I am honored to receive the Harlin McEwen Award,” said John Stevens. “Throughout my career, I’ve had the pleasure of working alongside the men and women who protect our communities in New Hampshire. Advocating for New Hampshire’s police, fire, and emergency medical personnel and public safety dispatch has been the highlight of my career. I truly believe that they deserve nothing but the very best.”

For nearly 10 years, Stevens has served as the Statewide Interoperability Coordinator (SWIC) in the Office of the Commissioner and the Division of Emergency Services and Communications for the New Hampshire Department of Safety. As the SWIC, he is responsible for coordinating interoperable communications for public safety across the state—including federal, state, county, and local government agencies, as well as non-governmental agencies and the private sector. Stevens coordinates a variety of activities critical to statewide public safety communications, including broadband planning and the deployment of FirstNet, the nationwide public safety broadband network.

“John Stevens is a leader in the field of public safety communications and a strong advocate for New Hampshire’s first responders. Throughout his career, John has been focused on delivering the best possible coverage, technologies, and operating conditions for the public safety community in his state,” said FirstNet Authority Board Chair Steve Benjamin. “His expertise and leadership are the epitome of the Harlin McEwen Award. We congratulate John on this well-deserved accomplishment.”

The FirstNet Authority established the Harlin McEwen Award in 2017 to honor the commitment, dedication, and service of leaders in public safety communications. The award is given to an individual who has helped advance broadband communications for daily public safety operations and emergency response.

“I’m very proud that a member of our team received this award,” said New Hampshire Department of Safety Commissioner Robert Quinn. “John works hard every day to ensure first responders stay connected across our state. I congratulate him for this recognition of his efforts and dedication.”

Stevens’ reputation and standing are well-known across New England and the nation. Prior to becoming the New Hampshire SWIC, he served as a Commanding Officer with the New Hampshire State Police, managing Troop Operations. Later, as a contractor, he applied this public safety expertise to assist the U.S. Department of Homeland Security in developing preparedness protocols for many of the nation’s national security special events. 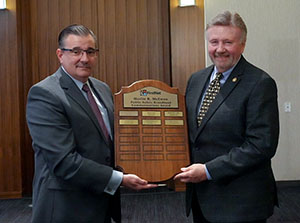